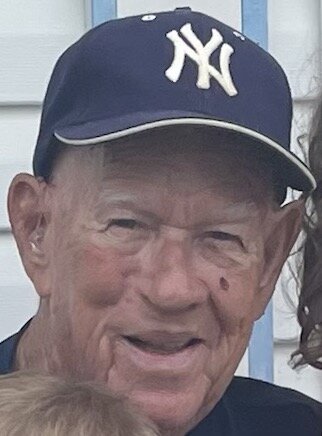 LORRAINE, N.Y. – William G. Johnson, 89, of Lorraine, died Wednesday June 15, 2022 at Samaritan Medical Center, Watertown, NY. There will be no memorial service, but a celebration of life will take place this summer.

Arrangements are with the Piddock Funeral Home Inc., Adams, NY.

Born June 30, 1932, in Diamond, son of George and Mildred (Weal) Johnson, he graduated in 1951 from Adams High School.  He married Mary E. Ives of Adams on July 28, 1951, in the Adams United Methodist Church.  The couple have lived in Lorraine all their married life.

Mr. Johnson worked many jobs during his life, but his last job was with the New York State DOT, retiring in 1989.

He was an avid New York Yankees, New York Giants and Syracuse University basketball fan.  He enjoyed summers at the lake and spending time with his family and his dog Mr. Wilson.

He was a charter member of the Lorraine Volunteer Fire Department.

Condolences may be made at www.piddockfuneralhome.com