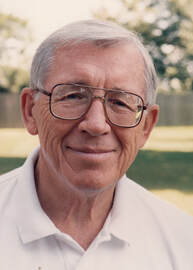 Chester “Chet” N. Benoit unexpectedly died at his home in Skaneateles on November 6, 2021, eight days after Eleanor D. Benoit, his wife of nearly 65 years, passed away from cancer.
Born July 22, 1925 in Putnam, CT, he was the only child of Napoleon (Bill) and Loretta Benoit. He attended St. Mary’s School for elementary and middle school and then Putnam High School. As an advanced student, he was granted early admittance to Tufts University and started his studies there in January 1943, while receiving his high school diploma that June.
In June 1944, he enlisted in the U.S. Army and was called for active duty in November. Upon completing his training as a paratrooper and demolition specialist, Chet was deployed in May 1945 with the 503rd Regimental Combat Team to Negros Island in the Philippines. Following the end of the war, he was assigned to the 11th Airborne Division in Japan where he served during the U.S. occupation.
Upon his discharge from the Army in May 1946, Chet returned to Tufts, where he served as class president and was a member of Theta Delta Chi. Upon his graduation in 1949, he started a 45-year sales and marketing career in the electrical and electronic control industry, spending the last 14 years with Welch Allyn’s Electronics Division, which was an early innovator in the design and manufacture of bar code scanning technology. While at Welch Allyn, Chet was an early contributor to the establishment and expansion of the bar code industry trade association Automatic Identification Manufacturers (AIM), and he served as its president in 1992. He retired from Welch Allyn in 1994.
He was a dedicated communicant of St. Mary’s of the Lake Church in Skaneateles, a proud member of the American Legion Robert J. Hydon Post 239 in Skaneateles, and a long-time member of the Skaneateles Country Club, where he served on the board of directors. During his 53 years in Skaneateles, a community he loved so much, Benoit volunteered his time with numerous Central New York organizations, including the Oxford Street Inn, Unity Kitchens, Literacy Volunteers, FISH, Vera House, SAVES and Skaneateles Youth Hockey where he served as both a coach and long-time referee.
Like his wife, Chet loved traveling and he was privileged enough to travel across the lower 50 states, Europe, South America, Australia and Asia. And like his wife, his favorite trips were to France, Italy and an Elder Hostel trip to Quebec, where they studied French for three weeks. Coming from a Quebecois family, in his younger years, Chet was a fluent French speaker and was educated by French-speaking nuns.
Chet is survived by his four children: Jeffery Benoit (Donna) of Dennis, MA; Lisa Levinson of Delray, FL; Ellen Donovan (Todd) of Skaneateles; and Marc Benoit (Jenn Yackel) of Marcellus; and his eight grandchildren: Danielle Levinson, Matthew Benoit, Philip Benoit, Liam Donovan, John “Jack” Donovan, Aidan Donovan, Will Kirk and Caleb Kirk; sisters-in-law Joanne Lynch of Hooksett, NH and Martha Duffy of Lowell, MA; and eight nieces and nephews.
At the request of the family, both the funeral mass and burial will be private. In lieu of flowers, per Chet’s wishes, the family encourages donations to the Saint Jude’s Research Hospital in Memphis, TN.
To send condolences, visit robertdgrayfuneralhome.com.

Beverly Louise Short, 86, of Sennett, passed away at home surrounded by her loving family on Monday. Beverly was...

Bryan A. Byler, 58, of Auburn passed away on December 30th unexpectedly at his house. Survived by a son Dylan...

After a brave, year-long battle with stomach cancer, John Omar Spain, a Skaneateles resident, died at home on December...

A life of Amazing AdventuresRussell J. (Skip) Pringle, 95, passed-away on Wednesday, December 22, 2021 at his home in Skaneateles,...